“The greatness of the human personality begins at the hour of birth. From this almost mystic affirmation there comes what may seem a strange conclusion: that education must start from birth.” 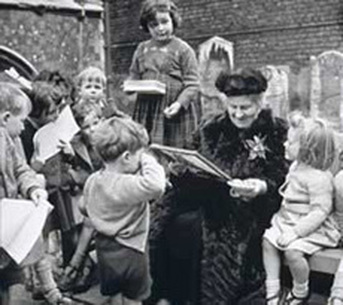 Maria Montessori is regarded as one of the world's most outstanding educators and psychologists. She was born in Italy in 1870 and against all traditions began, at age thirteen, to attend a boys' technical school in preparation for her dream of being an engineer. After seven years of engineering she began premed and became the first female doctor in Italy.

In her work at the University of Rome's psychiatric clinic, Dr. Montessori developed an interest in the treatment of children, and for several years, wrote and spoke on their behalf. She based her conclusions on the direct observation of children, accepted no preconceived opinions or theories about their abilities and did not attempt to manipulate their behavior toward any end. She constantly experimented and developed materials based on the needs, interests, and developing abilities of children.

At age twenty-eight, she became the director of a school for 'unhappy little ones' which she called mentally disabled children. She spent eleven hours a day at the school, and late into the night at home, working on this project.

After two years under her guidance, these children, who formerly had been considered uneducable, took a school examination along with normal children and passed successfully. Educators called Dr. Montessori a miracle worker. What was her response? If mentally disabled children could be brought to the level of normal children, Dr. Montessori wanted to study the potential of "normal" children.

She went back to school to study anthropology and psychology and finally, in 1907, received the chance to intensively study normal children. She was asked to take charge of fifty children from the dirty, desolate streets of the San Lorenzo slum in the city of Rome.

"Like others I had believed that it was necessary to encourage a child by means of some exterior reward that would flatter his baser sentiments, such as gluttony, vanity, or self-love, in order to foster in him a spirit of work and peace. And I was astonished when I learned that a child who is permitted to educate himself really gives up these lower instincts. I then urged the teachers to cease handing out the ordinary prizes and punishments, which were no longer suited to our children, and to confine themselves to directing them gently in their work." - Dr Maria Montessori

After years of expression mainly in pre-schools, Montessori philosophy is finally being used as originally intended, as a method of seeing children as they really are and of creating environments which foster the fulfillment of their highest potential - spiritual, emotional, physical, and intellectual - as members of a family, the world community.

Dr. Montessori gave the world a scientific method, practical and tested, for bringing forth the very best in young human beings. She taught adults how to respect individual differences, and to emphasize social interaction and the education of the whole personality rather than the teaching of a specific body of knowledge.

Montessori practice is always up-to-date and dynamic because observation and the meeting of needs is continual and specific for each child. When physical, psychological, and emotional needs are met children glow with excitement and a drive to play and work with enthusiasm, to learn, and to create. They exhibit a desire to teach, help, and care for others and for their environment.

The high level of academic achievement so common in Montessori schools is a natural outcome of experience in such a supportive environment. The Montessori method of education is a model which serves the needs of children of all levels of mental and physical ability as they live and learn in a natural, mixed-age group which is very much like the society they will live in as adults.